Currently, the chance of being infected with HIV through a blood transfusion is almost nonexistent. Because of stringent blood screenings put in place in March 1985 and strengthened in the 1990s, a patient’s risk of infection is now roughly one in 1.5 million, according to the US Centers for Disease Control. Before these screenings were required,…

The 2013 Great Southwest Book Festival recognized winners in the Festival’s Writing Competition during the East Meets West Literary Celebration in New Orleans Saturday evening. John Montandon, author of By His Own Blood was awarded an Honorable Mention among dozens of entries in the highly competitive non-fiction category.…

Entry Title: By His Own Blood

Books were evaluated on a scale of 1 to 5. This scale is strictly to provide a point of reference, it is not a cumulative score and does not reflect ranking.

A wonderful Amazon review of By His Own Blood has been posted by an old Texas friend from the past. Thank you, Art, for your very thoughtful words and for reconnecting after many years.  John

5.0 out of 5 stars Johnny, Gene and Miss Tennie, Doc and Mary…
Continue

I certainly appreciate the nice Amazon review that Greg Clonts submitted.  Thanks, very much, Greg.  Here are his comments.

TTU continues to mention By His Own Blood on its various websites.  I have had a number of former classmates and professors contact me after reading these articles. I do appreciate it.

Dearl Edge born and raised in the area this book was written about.

Being Born and Raised in the same Area this Book was written about and took place, I was particularly interested in Reading this Story.  I can very well Relate to a lot of what is written as I am only about seven years older than John or Johnnie as I remembered him. The Book is one that once you start reading it you don't want to put it down.  Of course I enjoyed all the Pictures and References he had in "By His Own Blood" too.  Although I don't remember a lot of the things written or some…

A few years ago my husband and I had the good fortune of becoming neighbors of John and Karen Montandon. It wasn't until I saw "By His Own Blood" prominently displayed in the window of a local bookstore, and bought a copy, that I learned of the tragic ordeal that the Montandon family endured during the final years of John's father's life.

While the events that led to Doc Montandon's death are tragic, reprehensible and enraging, at its core, this book is about family values, strength…

By His Own Blood is Now An iBook! 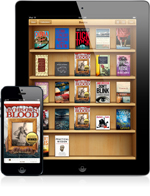 For those with an iPad, the By His Own Blood iBook is the way to go. This multimedia rich edition is the way to go. Link your Apple device to the iBook app and download the edition for a unique experience. This book features an introductory video by author John Montandon. Click the link here to explore iBooks.

The Future of Farming

My background and career have been dedicated to agriculture, so I am pleased to see this video. Even if you don’t know a lot about modern-day farming, you still might find this John Deere video interesting.  It is an outstanding presentation of where Agriculture, Precision Ag and Farming Technology is heading. Turn on your speakers so you can listen as you watch.

John talks about his book - video

I just posted a short video on this site.  You can see it by clicking on the VIDEO tab at the top of this page or go to http://www.byhisownblood.net/page/video.  It was also posted on YouTube just a short time ago.  John

By His Own Blood is now featured at USA Book News

Its good to see that By His Own Blood is now featured on the USA Book News web site.

The book is also listed throughout USABookNews.com
and their various genre links.

I have just edited and re-written a short story version of a part of By His Own Blood to be published as a magazine article or be the first of a series of articles. So, for those of you who might like to read the story or sample the book before you buy, just visit my web site at www.byhisownblood.com/story.

I'd love to get some feedback from readers.

I am pleased with a solid review for By His Own Blood from Publishers Weekly, which can be found at.......

(For those who don’t know, book reviews from Publishers Weekly don’t use a typical rating system; they just review books, and then give a single star to the books they like best. And: HOLY COW THE BOOK GOT A STAR.)

I wanted to share with you Dr. Strom's rather in-depth review of By His Own Blood.  I find his perspective to be quite interesting. You can read it at http://www.byhisownblood.com/strom.html  JM

Book Signing and the AIDS Quilt

The AIDS Memorial Quilt panel for our dad was included into the giant quilt on July 24 in Wasington DC.  The Quilt website will be updated soon and the panel can be searched and viewed.  There was also a good turnout for the By His Own Blood book signing at the Quilt Bookstore on July 24.  Thanks to the NAMES Organization for their invitation to participate in this wonderful event, and thanks to everyone who purchased a book that day. Half of the sales proceeds from… With more than 48,000 panels and 94,000 names, the AIDS quilt is a constantly growing testament to the deadly toll the disease has taken on the world. At roughly 1.3 million square feet, it is so large that it can’t be displayed in its entirety in one place. Parts of it were on…

Reviews on the book's web site

If  you haven't been to the REVIEWS page on the main web site, you might be interested to read them.  I am grateful to those who submitted for this page.  Thank you.  http://www.creativedirection.com/byhisownblood/reviews.html