I feel deeply honored to be invited by The NAMES Project Foundation, custodian of The AIDS Memorial Quilt, to discuss By His Own Blood on July 24 in Washington DC.  This will be in conjunction with a month-long event that raises awareness of HIV/AIDS.  A major part of the agenda will be to recognize the massive, 54-ton AIDS Quilt which honors family and friends who have died of AIDS.  The AIDS Quilt will be displayed at various locations around the…

An example of copy that did not make it into the book...

By His Own Blood consists of approximately 100,000 words. Before final editing took place, I had written over 200,000 words, so I had to get very serious during the final editing process, otherwise the book would have approached 600 pages, which would have been too long. In reality, much of the copy was not entirely relevant to the story I wanted to tell.
As an example, I've attached a short piece titled, "Who was Doc?" It may give you a sense of the…
Continue

Texas Tech University Posts Article About By His Own Blood

A very nice article about the book posted by the Texas Tech College of Agricultural Sciences and Natural Resources    http://www.depts.ttu.edu/agriculturalsciences/news/?p=1066

By His Own Blood, to be featured in the AIDS Memorial Quilt display in Washington, DC.

I met John at my business, Wayne Systems, Inc., (WSI) shortly after he and Karen had moved to California in approximately 1986/1987.  Hr had sought out WSI to do the "list maintenance" on the many ag…

I met John at my business, Wayne Systems, Inc., (WSI) shortly after he and Karen had moved to California in approximately 1986/1987.  Hr had sought out WSI to do the "list maintenance" on the many agribusinesses in California that John was calling on.  We hhit it off immediately and became very close. Our friendship spannewd several years, untill I sold my business, WSI, and moved to Orange Couyty Unfortunately, the company that purchased WSI did a miserable job of serving WSI's former…

2012 New York Book Fesitval Recognizes By His Own Blood

By His Own Blood is awarded Honorable Mention for Non-fiction in the 2012 New York Book Festival.  Award ceremony to be held in Manahattan on Friday, June 22.  I am honored and humbled that the book continues to be recognized by well known book critics and literary organizations.

Meet and Greet the Authors

If you live in or near the South Bay, please join me, along with dozens of other local authors for a "Meet and Greet the Authors" event at Mysterious Galaxy in Redondo Beach at 3:00 PM Saturday, June 23.  Check out additional details at....http://www.facebook.com/events/374300732629229/

BY HIS OWN BLOOD is an insightful and inspiring book in which its author, John Montandon, effectively paints a portrait of a time and place that most of us have never experienced.  It reminds me somewhat of Laura Ingalls Wilder's accounts of her family's struggles and triumphs in the "Little House on the Prairie" series of books and television shows.  His detailed accounts of his daily experiences, trials, and accomplishments growing up in a windy, warm west Texas town carve out a…

The 2012 International Book Awards has named By His Own Blood the Winner in the "Non-fiction : Narrative" category.  I am humbled and pleased that the book has received this prestigious award.  Thanks to all who have read the book.  John… 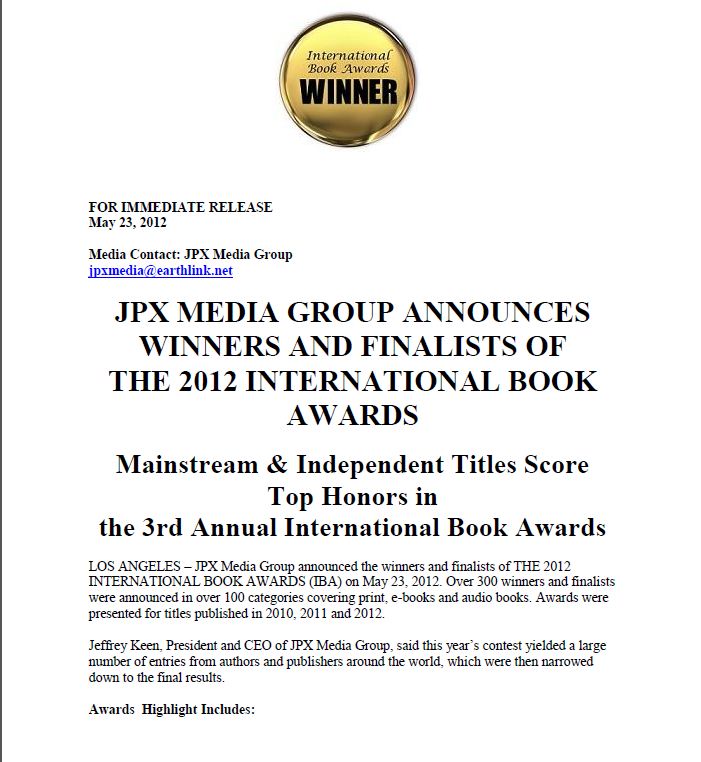 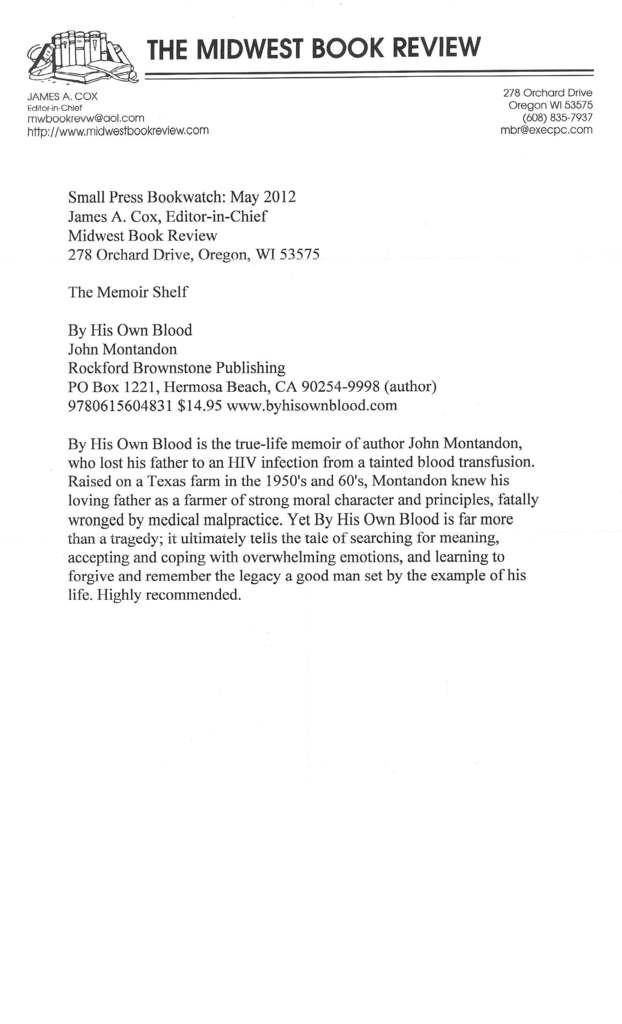 By His Own Blood has received a "Highly Recommended" rating from THE MIDWEST BOOK REVIEW, one of the leading book reviewers in the country. I am very pleased.… 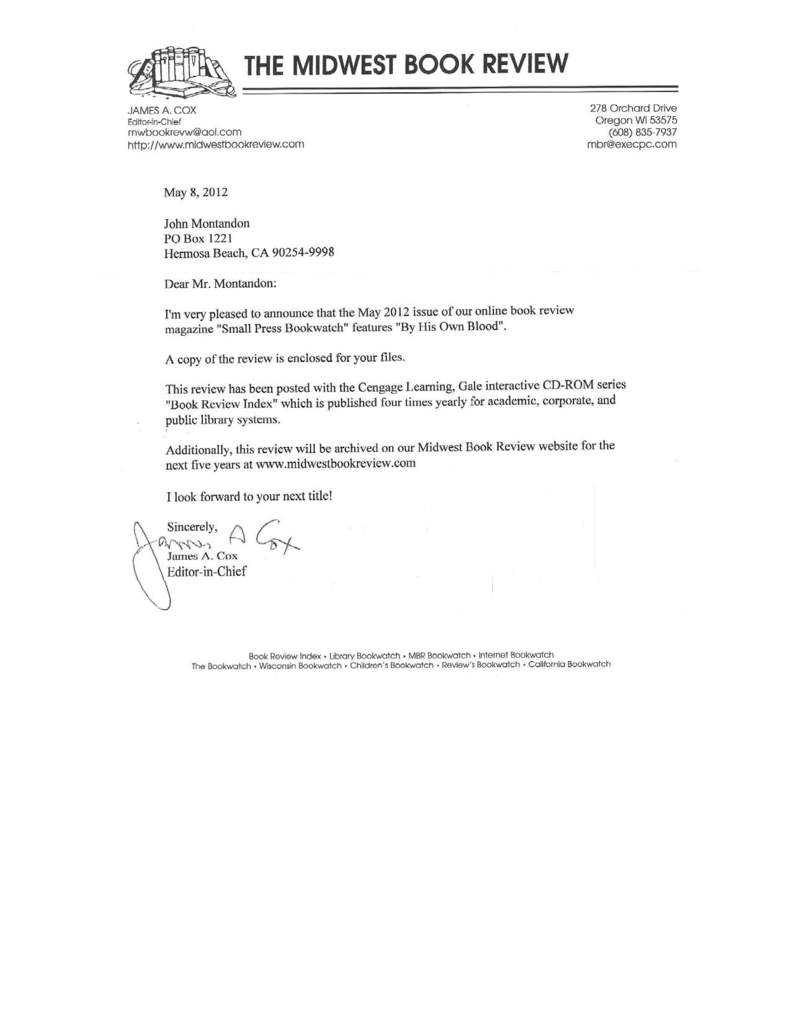 John, your narrative once again allowed me to close my eyes and see the cloud of dust trailing  a pick-up down a West Texas dirt road. With your prose those not fortunate enough to experience the fragrance of freshly turned soil or new mown hay will recognize how difficult it is to describe  such an experience.

As an employer of hundreds of students over 37 years I readily relate to your need to work parttime and in  the process you gained an experience not available in the classroom!…

I could not put it down!

I am reading it again to make sure I did not miss or more importantly feel something the first time around.

We grew up in the same years but different areas, and yet I was reminded of so many similar childhood fun events like making parachutes..

I was left with so much …I cannot wait to see the movie which I expect will happen. The story is so amazing.

I wonder how we would live our lives if we thought someone would write a book about it. You Dad did so well not knowing…

The Influence of a Father

What a story.  Your Dad seemed like an amazing guy and the apple does not fall far from the tree.  I cannot imagine the pain that you, Gene, and especially your mother endured through all of that.  Amazing story by an excellent story teller.

I want to thank you because your prose caused me to really reflect on the influence a father has on his child.  Your fondness of your father and the positive memories that stuck with you about how well he treated you really made me reflect on the…

Many of you know Wyman Meinzer from Knox County (Benjamin) and the fact that he is the official photographer for the State of Texas.  Those of you who do not know him, nor know what West Texas looks like, check out his music video at…

It took me nearly 8 weeks to read the first half of your book. And only two days to read the rest. I should have read it in a week, but I didn't.
I really enjoyed it. From the curious facts about life, a simpler life from years long gone, to Johns handling of an impossible situation, to his telling of an incredible story. It all ties in neatly in a wonderful book that flows marvelously from sentence to sentence and page to page.
I did not know what to expect from it. I've known John… Continue

John's book threw me for a bit of a loop. I wanted to file it away in the brain cabinet reference drawer titled "Biography", but it would not quite fit. I tried the "Documentary" drawer, but there also failed. I finally found a nice fit in the drawer titled "Take Me Home". I found "By His Own Blood" to be a warm, funny, enlighting connection to the outlet that powers the family machine. John's account of…

Kirkus Reviews proudly claims to be the toughest book critic in the world.  So, I was very interested to learn what they had to say about By His Own Blood and was quite pleased when I read their review.  I was particularly interested since Kirkus reviews carry a lot of weight with bookstores and other online resellers.  You can read it, along with several other professional reviews, at…

The word about By His Own Blood is spreading fast among booksellers, which is fantastic.  Here's, yet, another one that was just brought to my attention.

More booksellers are asking for the book.  And many more to come. Great!  Here's another.

By His Own Blood is now available online through Barnes & Noble